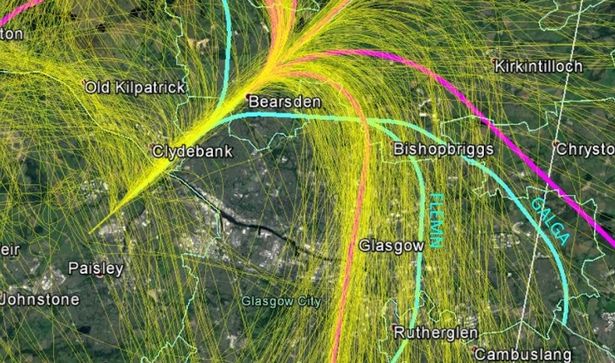 Glasgow Airport have launched a consultation on changing the flight paths for planes approaching and departing from Glasgow. The new flight paths could mean more planes departing from the airport by flying over Cambuslang and Rutherglen. The consultation is running from 15 January to 13 April 2018,and it is important that people make their views known.

The airport are proposing to replace the current ground-based navigation procedures with more advanced satellite-based procedures known as Area Navigation (RNAV) Global Navigation Satellite Systems (GNSS). These proposed procedures have been designed to improve the flow of air traffic whilst reducing fuel use, emissions and the number of people affected by aviation noise.

There would be two new flight paths affecting our community.

It should be noted that studies have found that aircraft noise can significantly impair human health, so there is a need to verify in more detail what exactly is projected for the noise impact on our communities.

The consultation asks for people to email Glasgow Airport at airspace@glasgowairport.com  indicating SUPPORT – In favour; NO COMMENT – have read the document and have nothing to add; NO OBJECTION – Neither in favour or not in favour;  or OBJECT – Not in favour. Explanatory detail is also sought.

Cambuslang Community Council will be speaking with our elected members to discuss the possibility of a public meeting with Glasgow Airport officials.

The consultation document is available here.

In the meantime, please let us know whether you have concerns about the proposed new flightpaths by emailing us at cambuslangcomco@aol.com.